The following includes an account of a test session conducted by Callaway engineers during validation of the Callaway HD Cooling System. This data illustrates the improved performance provided by the HD Cooling System, compared to the Chevrolet OEM Z06 cooling system.

Test Procedure:
All test data starts at T=0, when the vehicle reaches 20 mph at the pit exit, entering the track.

The Callaway Corvette SC757 with the stock Z06 cooling system configuration was driven until coolant and oil temperatures reached unsafe limits. At that point, the driver had to stop the test. The vehicle was only able to be driven hard for approximately five (5) minutes before having to terminate the test and take cool-down laps. The engine coolant temperature became the limiting factor. It climbed so quickly that neither engine oil temperature nor manifold air temperature were able to reach acceptable operating temperatures before the test had to be stopped. The Callaway Corvette SC757 with the Level 2 (LV2) HD Cooling System could be driven for the full session without having to slow down or stop due to excessive engine operating temperatures. The graphs shown below illustrate that these temperatures stabilized at approximately eight (8) minutes into the test and then remained at a steady, safe level, for the entire duration of the test session.

Test Procedure:
All test data starts at T=0, when the vehicle reaches 20 mph at the pit exit, entering the track.

Engine Coolant, Oil, and Manifold Air Temperature Notes:
With an ambient temperature delta of 28ºF, all temperatures indicate a delta shift of 20ºF to 25ºF, showing that, even at an ambient 113ºF, a Manual Trans SC757 with the Callaway HD Cooling system stays within a safe margin for operating temperatures.
Additional note: The test completed in ambient 113ºF conditions experienced data log failure after about 7 minutes. However, the temperatures had already saturated for engine coolant, engine oil, and manifold air, and continued to stay at consistent temperatures for the rest of the 20-minute session. This was confirmed using the in-vehicle performance data recorder. 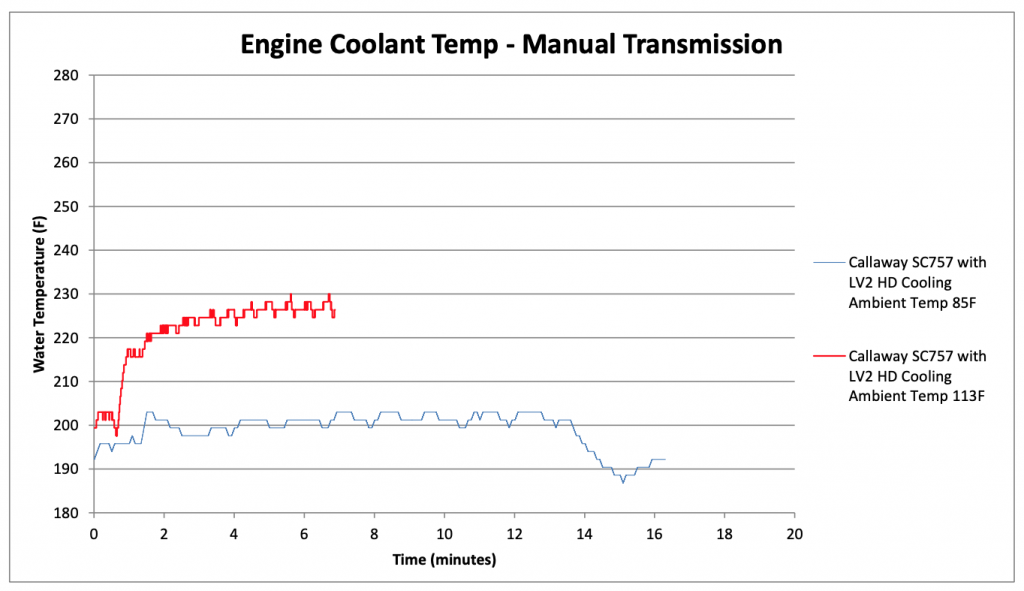 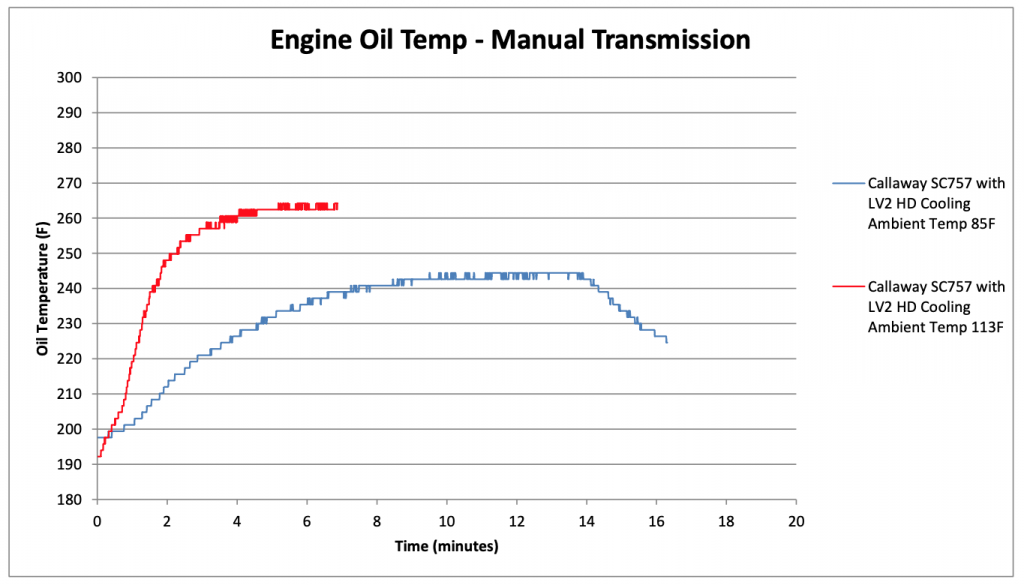 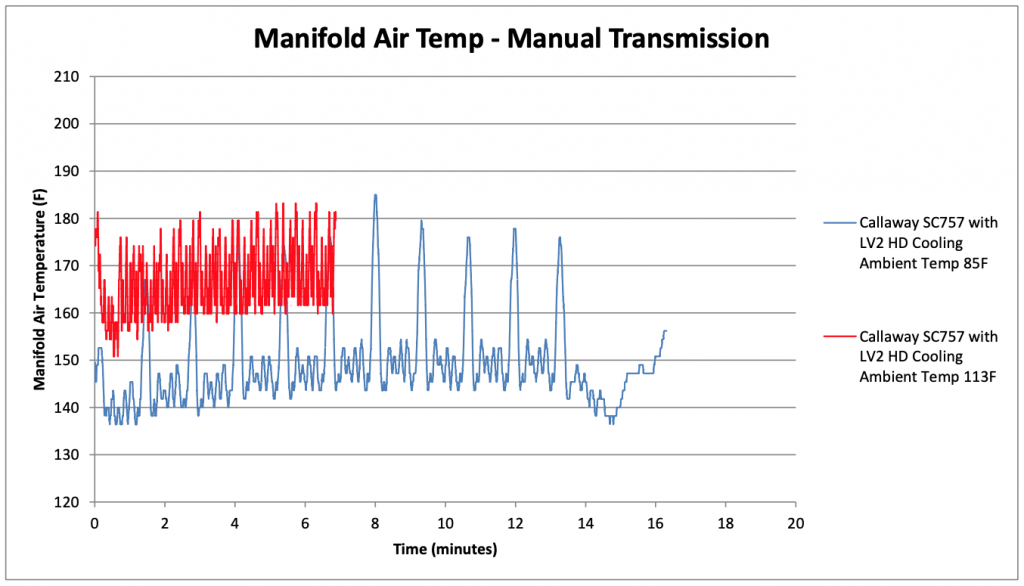 Vehicle Speed Notes:
Shows the difference between the lower-speed, tight-cornered Thompson track vs. the higher-speed Willow Springs track, and that the HD Cooling system performed well in both situations. 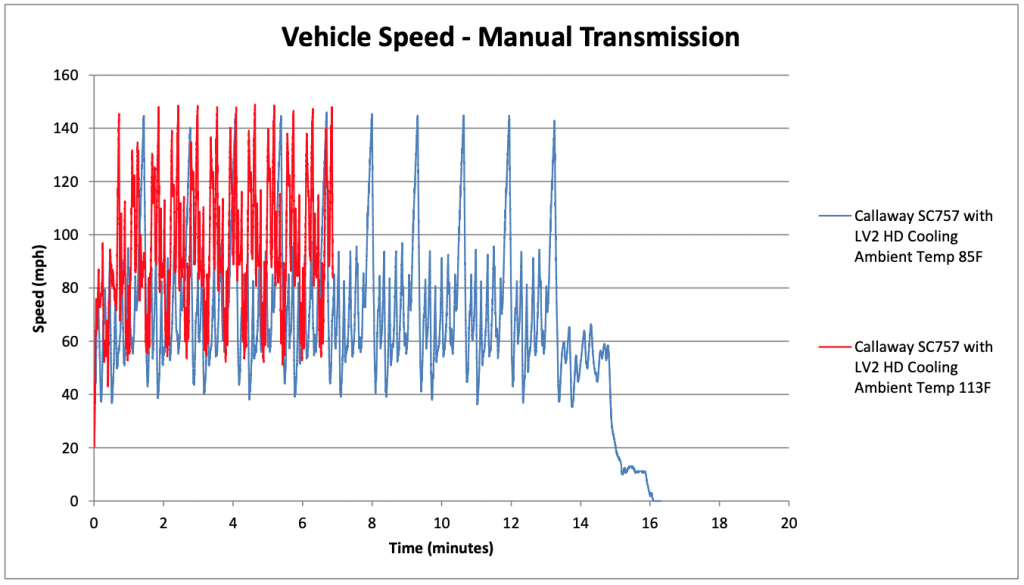 Engine RPM Notes:
Shows that both cars were driven hard and loaded fully throughout the session. 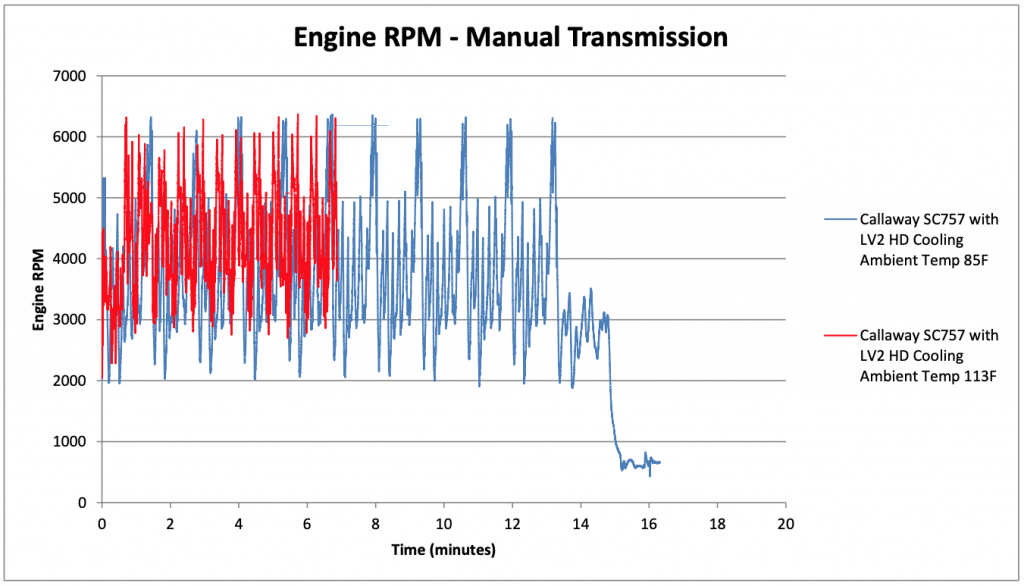