Return to Pre-Owned Callaways For Sale 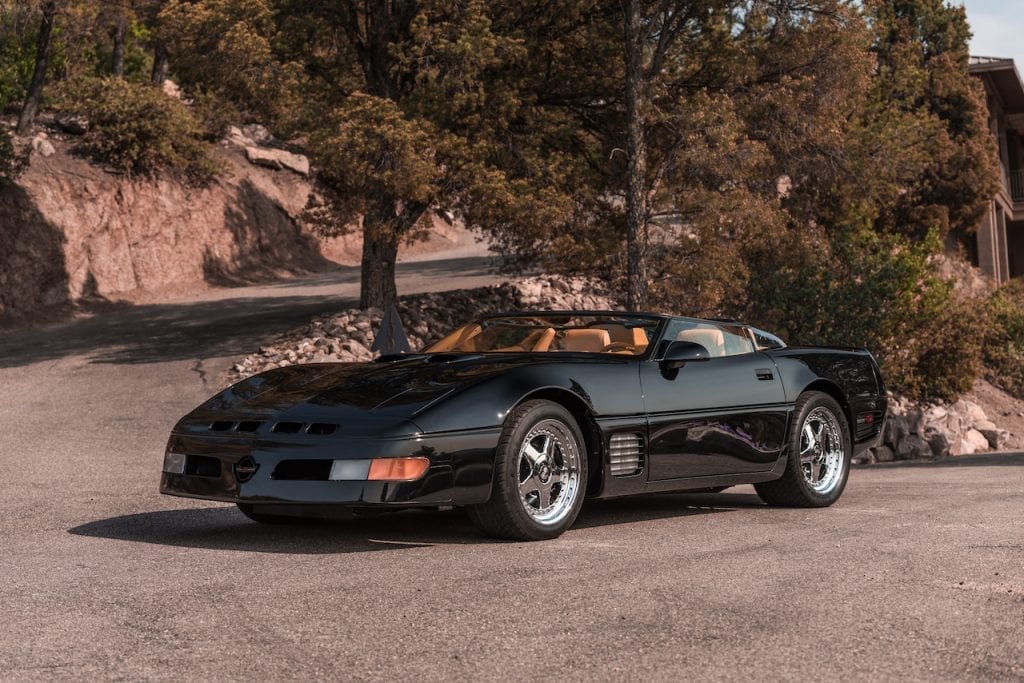 For Sale By Owner

Commissioned by director James Cameron during the Titanic period of his career, as a gift for Linda Hamilton, his then girlfriend and future wife.

This 1991 Callaway Speedster is finished in Ultra Black over Goldenrod leather. This is 004 of 10 Callaway Twin Turbo Series One Speedsters. Now showing 4,335 miles, the car was built with Regular Production Option B2K Callaway twin-turbo 5.7-liter V8 rated at 402 horsepower and is mated to the OE 6-speed ZF transmission. Callaway’s Z5G mandatory special equipment package was also optioned, a long air dam, power steering cooler, and J55 front brakes. Chevrolet options include electronic A/C, a Delco/Bose stereo, FX3 selective ride and handling suspension, dual adjustable sport seats, and an engine oil cooler. A service was performed in preparation for the auction as described below, and this Speedster is now being offered with both original window stickers, the GM build sheet, factory manuals and accessories, and a clean title still in James Cameron’s name.

All Callaway Speedsters in Series One were built on the 1991 Corvette convertible platform. All were equipped with Regular Production Option B2K as the starting point. Cars ordered with this option code were built at the Corvette assembly plant, Bowling Green, Kentucky, and shipped via transporter to Callaway’s Old Lyme, Connecticut facility. They were processed mechanically to become Twin Turbos, and additionally processed for the Speedster style bodywork and a full German leather interior and wool carpet set.

The Twin Turbo Engine. Model Year 1991 was the final year of production for the Twin Turbo program. The engine program had produced more than 400 Twin Turbo engines to date. The resulting engines were very powerful at 450 bhp and 613 lb ft of torque. They were mature, reliable and enormously fun to drive. Quite docile in normal use, with a huge power-on-demand reservoir of instantaneous yet smooth and progressive power. Akin to falling off a cliff in their constantly accelerating behavior. Tractable enough for your Mom to take to the store, yet powerful enough so that very few were willing to hold wide open throttle for more than a few seconds.

Reeves Callaway’s Speedster is a contemporary functional and styling statement. It revives the traditional role of American speedsters from Auburn, Stutz, Mercer …and the Bonneville Salt Flats. The Speedster is the ultimate Callaway Corvette and Callaway Cars has provided the benchmark for powerful automobiles since introducing the Regular Production Option B2K from General Motors Twin Turbo Corvette in 1987.

“When the pedal goes down, the Speedster instantly launches into total acceleration. The car feels like a jet sled, piling up speed exponentially going into a sweeping turn and still gaining. Velocity rises in a steep, linear climb until we need to slow for a knot of traffic. Then another turn, more speed. Total grip, phenomenal adhesion.”
– David Barry, Sports Car International

The Callaway Speedster was a Limited Edition of 10 cars, each built to order and each unique in its color combination. No two were the same. Ten Speedsters were built on the L-98 Twin Turbo platform. They are 50-state emission compliant automobiles, meeting the requirements of the Federal Clean Air Act and the California Air Resources Board.

Each Callaway Speedster was commissioned and built by agreement between Callaway and the client, in the case of Speedster 004 this was built for James Cameron, director of the movie Titanic. To this Powerfully Engineered twin turbo platform, the client added the Speedster body and Connolly hide/Wilton wool interior of choice, exactly as buyers of Duesenbergs, Bentleys and Alfa Romeos of the Classic era once selected personal coachwork from Murphy, H.J. Mulliner and Zagato.

“It’s about the closest you can come to quantum physics in a production automobile. One moment you are here and standing still, the next you are there and going 60 mph. And a moment after that, well…”
– John Lamm, Road & Track

Each Callaway Speedster client also chose from an infinite color choice, to reflect any life- style or visual preference. The Speedster’s paint palette, from Spies-Hecker, Europe’s premiere supplier of high quality automotive paint, ranges from solids, through pearls and candy metallics applied by paint craftsmen who delight in the fussiest detail. In the tradition of Barker, Ghia, Saoutchik and Murphy, before final finish is commenced each Speedster client receives exactly painted panels for approval.

The Callaway Speedster is the third in the line of Callaway Cars. It was introduced to the public at the 1991 Greater Los Angeles International Automobile Show, to the worldwide acclaim of journalists, designers and enthusiasts. It is a styling and functional statement like no other, yet it revives the traditional role of the American Speedsters such as Auburn and Stutz.

“During the 1910s and ’20s, if you were young, wealthy and impudent, you drove a Speedster because that was the thing to do. Stripped of such banalities as doors, roofs and windshields, this rakish body style represented motoring in its purest form: two seats, a face full of wind and weather, a hot engine and a snarling exhaust.”
– Don Sherman, Corvette Quarterly

The car’s handling, braking, and accelerative capabilities are only part of the story. The bodywork is a genuine masterpiece. The basic Callaway body shape is derived from the Project SledgeHammer which achieved a world closed course speed record of 254.76 mph at the Transportation Research Center in 1988. Devoid of wings and spoilers, this car’s shape is truly a case of form following function.

“As with other Callaways we’ve driven, the Speedster comes into its own beyond about 70 mph. Up to that, it’s Corvette nimble, Corvette quick. Then, it’s Callaway dynamite. A missile launched by a booster rocket.”
– Jean Lindamood, Automobile Magazine

The Speedster though, is a topless road-going automobile. Its unique styling incorporates wrap-around glass and a low cut windshield. A special air deflector profile formed into the windshield header makes driving comfortable at moderate speeds. But make no mistake: this is definitely open air motoring.

The full leather interior work from Germany gives the opportunity to accent the leather color against the exterior to produce effects from striking to subtle. Connolly hides, stitched by the best interior craftsmen, broadcast the look and feel and aroma of a superb motorcar. The carpet selection is coordinated at the same time to produce just the right statement.

We are very, perhaps inordinately, proud of the Callaway Speedster Series. It is a high watermark that expresses the standards of design, engineering, performance, quality and construction that we strive to showcase in Callaway automobiles.

“… walking around the car in person is retinal reverie. Deutschman has created more than custom bodywork here; it’s a virtual transformation, an artist’s impression of what a Corvette ought to look like.
– Kim Reynolds, Road & Track

The Callaway vehicle listed above as “For Sale by Owner” is displayed as part of a service to Callaway owners to promote vehicle sales. Callaway Cars Inc. has no confirmed knowledge or of the representation of the condition or of the suitability of this vehicle, unless specifically stated. This vehicle is not physically located at any Callaway Cars facility; however, it is confirmed to be authentic as Callaway-built. The vehicle has not been seen or otherwise inspected by Callaway Cars Inc. in conjunction with this listing.

This is a listing service only. Inquiries for this vehicle should be addressed to ownercare@callawaycars.com. Reasonable and serious inquiries will be forwarded to the seller. All transactions will be between the seller and the inquiring parties. Callaway Cars Inc. does not become involved with the transaction beyond introduction of seller and the inquiring party/buyer.