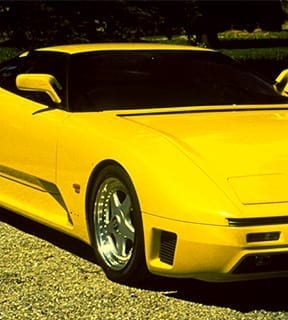 In 1990, Renzo Rivolta’s son, Piero, asked Callaway to be the engine supplier to his new Iso Rivolta Grifo 90, a revival of the Iso Rivoltas from the 60’s and 70’s. The Iso Rivolta cars had DNA that included Italian coachwork and V8 engines from Corvette – an inspiring formula for many.

Now the challenge was to create a powerful, modern, 1990’s design and restart the car company. Three elements were brought together: Marcello Gandini (designer of the Lamborgini Miura, among others), Gian-Paolo Dallara (Dallara formula cars) and Callaway to be the contributors to the Grifo 90 Project. The design was penned, the full-size clay commissioned, and the car was presented to the Press in Italy in the Spring of 1990.

The economics of the time prevailed and the promises of government financing never materialized, and the project halted. Too bad. The one thing you cannot create when launching a new automobile is a history. Rivolta already had a great one.